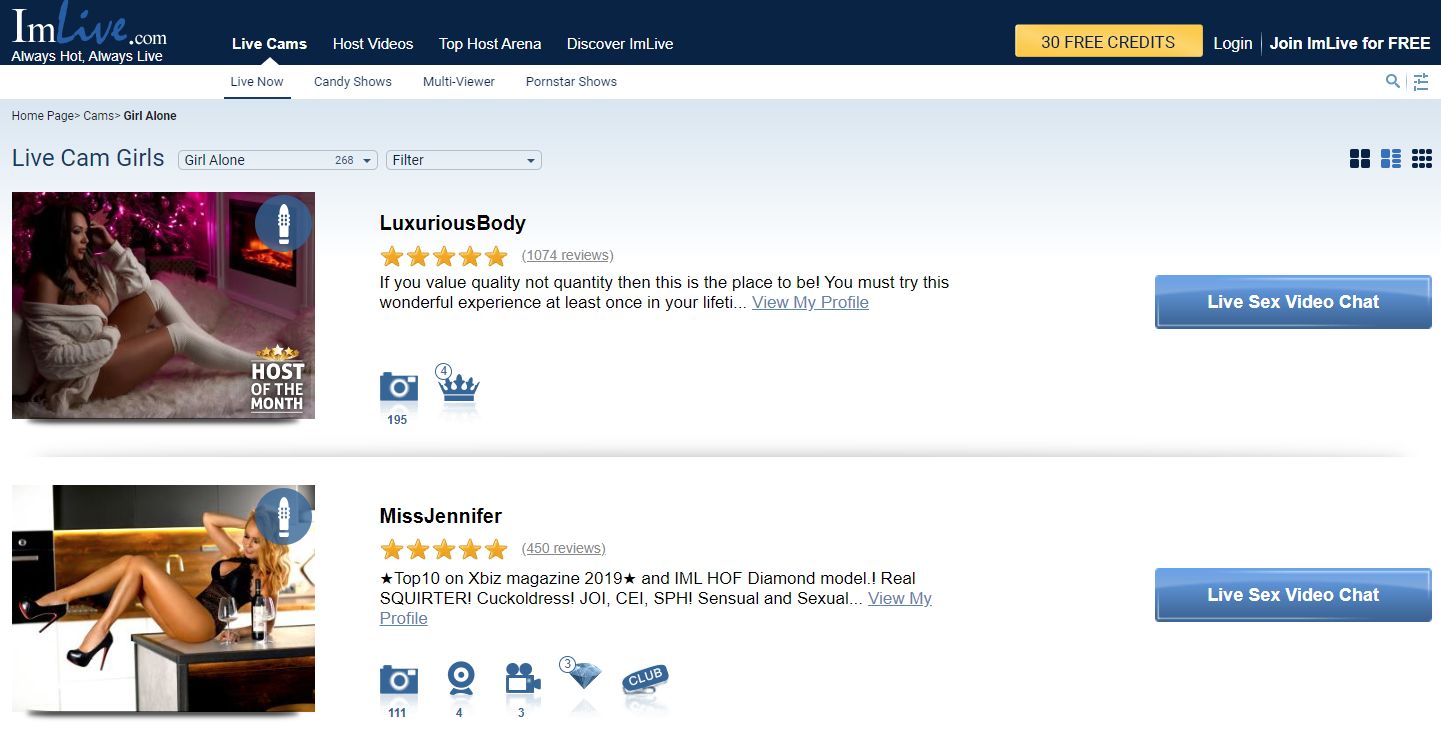 Our ImLive reviews below delve deeper into topics that prospective users will want to know. Each of the top cam sites discussed on our review site gives an insight into how they work and what they cost.

ImLive is an online adult entertainment company that is global and makes 10’s millions of dollars in annual sales on the world wide web. They are a live sex chat site and company with interactive webcams that connect amateurs in all parts of the world.

Their cam site company is based in Cypress and they have a large marketing budget with a heavy footprint at adult entertainment conventions each year as well. This cam site has won awards for being a fan favorite at these adult conferences from Bogota to Las Vegas as well as dozens of other locales.

There are currently an average of 500 – 600 cam models both men and women live at Imlive.com each and every day.

How we ranked the top adult cam sites was based on what you the users told us and continue to tell us each day. In the upper right-hand corner of this page of ImLive reviews s you can click the number of stars this cam site deserves.

As far as sites similar to ImLive.com, I would suggest you check out our Streamate reviews. That cam site is not only similar but English speakers tend to prefer it because of the volume of USA cam girls there.

This was the old ImLive (image below)

Generally speaking, cam girls chat costs here will set you back $3.00 per minute; more or less depending on the cam girls you want to get naughty with on webcam.

When we last tested this cam site the ladies we chose to chat with on webcam were LovelyBellaa, SabrinaGrey, LovlyDeeaXXX, which are in our opinion some of the top overall cam girls on ImLive, if not the hottest as well.

The cumulative average price between these ladies was just $3.20 per minute.

A few big changes came to imlive cams over the past 2 years. Most notably the video shows, 1 second is 1 credit and 15 seconds is 7 credits. These sex vibe cam shows are their twist on Chaturbate or most would say that is the case.

That said, you’d also be wise to compare the two and read our Chaturbate reviews.

The naughtiest section of imlive tends to be the fetish cams or the college girls webcams. However, they really have lots of sexy older women doing live sex shows as well.

The other big change to this popular live video sex site was Candy shows. You see a few candy shows but it’s just a clever way to say group sex cams show.

There is not a group of performers but rather a group of viewers who can access that private performance. If you see an ImLive candy show, it means you pay the candy fee and then get to participate with whoever else opts into the show.

These webcam shows are typically 5-7 minutes in duration and all viewers who have paid the fee get to request things of the cam girl. They are less costly than private shows as well.

It’s hard to really suggest sites like ImLive since it’s basically a blend between so many other sites. Perhaps one could say LiveJasmin (review at that link) is a site like ImLive, but it’s much more simple to use with less complicated distractions.

There may be more HD webcam sex shows on LJ cams as well as more models overall. Another webcam sex site like ImLive is CamSoda (review at that link) in that they use credits and focus on both private nude cam shows as well as offering the ability to tip and activate sex toys in live time.

The similarities would have to stop there though because each of these platforms has something unique to offer and will cater to different users.

ImLive is another one of the best cam sites which has outperformed almost all others in recent years while keeping the quality of the site high and costs to users low. ImLive.com is a live sex cams site I would comfortably suggest to others for the selection and value.

It’s a bit of a dressed-down no-frills cam site that lets the webcam shows themselves do the speaking for them.

The navigation through the site is simple and the seamless browsing experience ImLive.com offers is the reason why we love it.

LiveJasmin reviews – What It’s REALLY Like to Be a Member!

At TopAdultWebcamSites.com we document and share our experiences at live cam sites.

For 2021 we also added chat roulette sites as a new section of cam sites that we test and try.

The fact is lots of people are being misled about these being alternatives to adult cam sites and they are just not anything of the sort.

Learn more about chat roulette sites like dirtyroulette or chatalternative in that new category.

All rights reserved. No part of this publication may be reproduced, distributed, or transmitted in any form or by any means, including photocopying, recording, or other electronic or mechanical methods, without the prior written permission of the publisher, except in the case of brief quotations embodied in critical reviews and certain other noncommercial uses permitted by copyright law. For permission requests, write to the publisher using the contact form above.

We Practice What We Preach

We think when it comes to adult entertainment that there should be a higher standard and as a collective of users it’s important to have high expectations.

When using live sex webcam sites you want transparency and the same is true when reading reviews about adult video chat sites.

That is why we want to give you this earning disclaimer.

At times when you visit certain sites and follow links off this site, we may earn a commission. This does not impact the prices you pay and we remain always focused on neutrality.