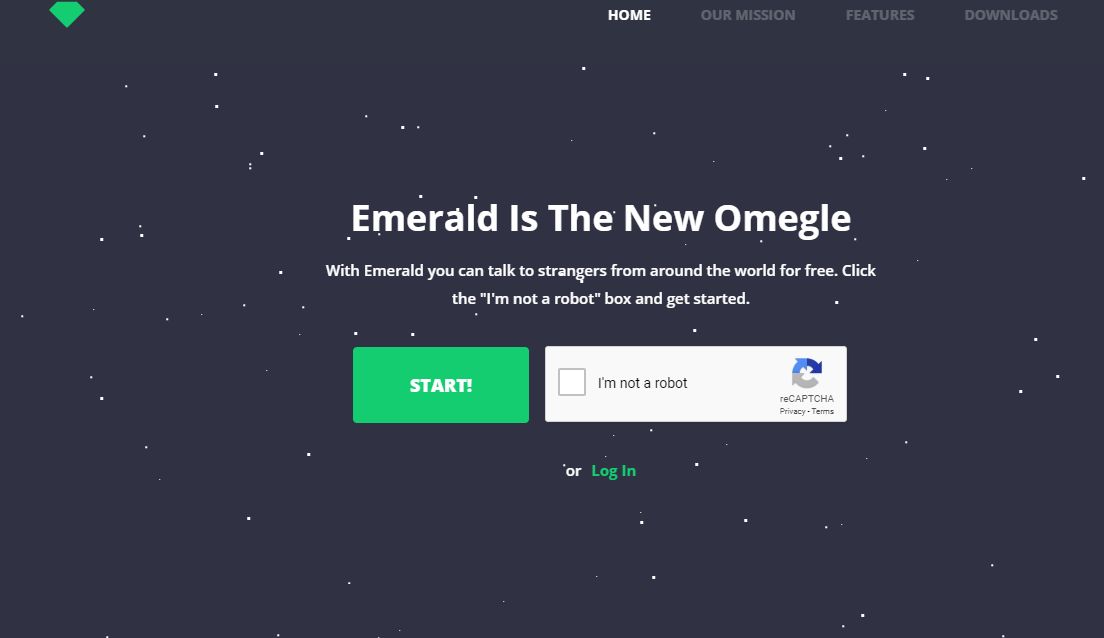 EmeraldChat is a free chat site created for adults to connect with strangers around the globe. Emerald Chat claims to be Omegle alternative. But is that enough to

Random chat apps have proven themselves to be extremely unsafe numerous times, and yet the Internet just won’t let this site genre die. Just recently, a new random chat site, Emerald Chat, joins its ranks as a self-proclaimed “new Omegle.”

Like Omegle, Emerald Chat offers users a way to meet and chat with strangers around the world via webcam without ever having to register.

Emerald Chat claims to have a host of new features the random chat world has never seen before, even promising a bot-free experience.

This feature in itself would be extremely impressive since its predecessors have long been plagued by various bots delivering canned responses in a feeble attempt to get new users to sign up for various other websites.

If you want to stack the odds of meeting a decent and interesting human being in your favor (as much as the site will allow, anyway), Emerald Chat even offers filters to sort matches by gender and “karma rating”, among other criteria.

Fortunately, if and when anything does go awry as you encounter Internet strangers, the platform provides full-time moderation and support. Or so they say?

Since Emerald Chat is relatively new, their mobile app for Android and iOS is still lurking on the horizon, but the homepage says that it “works great”, so for now, we’ll just have to take their word on that.

The problem though is the users and lack of anybody but dudes wanking off yet again! Just when we thought Omegle & 321SexChat (review at the link) is loaded up with perverts looking to jerk off, EmeraldChat is no different.

Emerald Chat is currently working on an updated design to reflect its younger audience, which is at least one thing it has over Omegle.

Emerald Chat’s dedication to keeping the chat room bot-free (and keeping low-quality users to a minimum) is dictated by the karma system–an in-site mechanism by which users can attribute good or bad “karma” to the strangers they match with.

Check the image on the right side, this was the first person we encountered; a man with his head off-camera rubbing his dick through his pants!

While this is a great step in the right direction, keep in mind that like similar attempts by chat sites to secure their platform from bots and sex-crazed dick-slingers, all of these measures are retroactive, not preventative.

Because Emerald Chat doesn’t require its users to sign up before participating in its online community, the site isn’t storing information like email addresses, names, or passwords.

Instead, the platform largely relies on word of mouth from its members to determine which users get weeded out.

On Emerald Chat, your match history can be accessed from your profile so when you’re disconnected from a user, it’s easier to find them again later. Admittedly, this is a double-edged sword and can either be an avenue for genuine friendship or harassment depending on the user’s intentions.

The bottom line: be wary of Emerald Chat and random chat sites like it.

Not to mention it is an affordable live sex cams site costing typically less than a few dollars per minute. You also might want to consider check out ImLive or MyFreeCams (review at the links), both are formidable platforms for free sex chat.

Although the Emerald Chat platform seems to be highly concerned with the quality of its user base, its safety measures are hardly 100% effective.

Just remember that this is not a sex-centric community, so searching for your next hookup by chatting with strangers here might just give you some bad karma!

Video chat is really common among consenting adults these days and the aspect of being able to talk to strangers about sex is kinda hot. We get that!

The consideration you really have to make though is this the place to talk to girls and jack off on cam?! Probably not.

However, when you enter LiveJasmin (review at the link) site, you don’t need to think twice because it’s one of the secured and finest sex cam chat sites available on the planet.

The idea this is a new Omegle, really isn’t a good one! Omegle sucked then and in general, the time we spent on this so-called random chat app called emerald chat was time wasted.

Well, it’s not the first time I encounter such disappointing shitty sites like Emerald Chat.

For adult chat users have to remember is, never trust a free chat site. Because it’s never safe and secured to use, no matter how smartly they market themselves.

Instead, have a glance at the trusted cam site like Streamate.com for naughty webcam shows with the world’s hottest models. Of course, who doesn’t like to watch sex cam shows for free?

At TopAdultWebcamSites.com we document and share our experiences at live cam sites.

For 2020 we also added chat roulette sites as a new section of cam sites that we test and try.

The fact is lots of people are being misled about these being alternatives to adult cam sites and they are just not anything of the sort.

Learn more about chat roulette sites like dirtyroulette or chatalternative in that new category.

All rights reserved. No part of this publication may be reproduced, distributed, or transmitted in any form or by any means, including photocopying, recording, or other electronic or mechanical methods, without the prior written permission of the publisher, except in the case of brief quotations embodied in critical reviews and certain other noncommercial uses permitted by copyright law. For permission requests, write to the publisher using the contact form above.

We Practice What We Preach

We think when it comes to adult entertainment that there should be a higher standard and as a collective of users it’s important to have high expectations. When using live sex webcam sites you want transparency and the same is true when reading reviews about adult video chat sites.

That is why we want to give you this earning disclaimer.

At times when you visit certain sites and follow links off this site, we may earn a commission. This does not impact the prices you pay and we remain always focused on neutrality.